THE STORY OF SILVER

How the White Metal Shaped America and the Modern World

This is the story of silver’s transformation from soft money during the nineteenth century to hard asset today, and how manipulations of the white metal by American president Franklin D. Roosevelt during the 1930s and by the richest man in the world, Texas oil baron Nelson Bunker Hunt, during the 1970s altered the course of American and world history. FDR pumped up the price of silver to help jump start the U.S. economy during the Great Depression, but this move weakened China, which was then on the silver standard, and facilitated Japan’s rise to power before World War II. Bunker Hunt went on a silver-buying spree during the 1970s to protect himself against inflation and triggered a financial crisis that left him bankrupt. 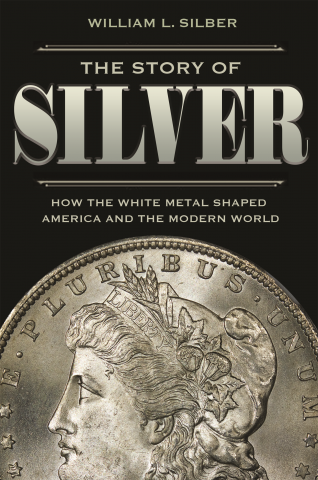 Silver has been the preferred shelter against government defaults, political instability, and inflation for most people in the world because it is cheaper than gold. The white metal has been the place to hide when conventional investments sour, but it has also seduced sophisticated investors throughout the ages like a siren. This book explains how powerful figures, up to and including Warren Buffett, have come under silver’s thrall, and how its history guides economic and political decisions in the twenty-first century.

Listed as one of the "Best Books of 2019: History" by The Financial Times

"The Story of Silver is the biography of America's first monetary metal. Biography is the word, as William Silber's colorful narrative is one of personalities as much as it is of ideas and events. Like gold, silver can preoccupy its fans to the point of obsession, as it did the Hunt brothers, Texas inflation-phobes who lost a fortune in 1980 by betting on silver and therefore against Paul Volcker, then chairman of the Federal Reserve, and Mr. Volcker's sky-high interest rates."--James Grant, Wall Street Journal

"Deeply researched and authoritative. . . . A well-informed history of silver's allure."--Kirkus

"This is an enjoyable book, combining political and economic history, unlikable people, lucid explanations and an authorial tone that is sometimes firmly tongue-in-cheek."--Kathleen Burk, Literary Review

"Impeccably researched. . . . There is no shortage of compelling material to ponder."--John Plender, Financial Times

"The book is entertaining and enlightening. It should appeal to a wide audience, including anyone . . . who likes a well written story. Silber is an architect of palatable prose. . . . Silber's book is insightful and enjoyable. It deserves to be read widely, particularly his chapters on Roosevelt's silver policies and their effect on China. These chapters raise questions about the nature of the United States and why our political system at times pursues policies that benefit small groups of our citizens at the expense not just of the rest of our nation but of the rest of the world."--Gary Richardson, Regulation

“Enlightening as well as fun to read, William Silber’s The Story of Silver reminds us that the economic history of the world is inseparable from the history of this precious metal. As Silber recounts, politicians and business leaders, idealists and scoundrels have long found it irresistible.”—Robert J. Shiller, Nobel Laureate in Economics

“Successfully combining key episodes throughout American financial history with some investment advice, this sound and impressive book examines the political economy and monetary role of silver. Engaging and often humorous, The Story of Silver is quite a good read.”—Richard Sylla, author of Alexander Hamilton: The Illustrated Biography

“William Silber’s fascinating account of the history of silver—as commodity money, speculative asset, industrial metal, and constituent of jewelry—features larger-than-life figures William Jennings Bryan, Key Pittman, Lamar Hunt, and many others. A fine economist with a keen eye for historical facts and episodes, Silber analyzes the economics and politics that determined the value of silver and its role in monetary systems and asset markets.”—Thomas J. Sargent, Nobel Laureate in Economics

“Many Americans know that William Jennings Bryan championed the free silver movement in the nineteenth century, and some of a certain age recall the Hunt brothers’ disastrous attempt to corner the silver market in the 1970s. But William Silber shows that machinations surrounding silver have been at the center of economics and politics since America’s inception. Full of riveting information and colorful details, The Story of Silver is an apt companion to Peter Bernstein’s classic The Power of Gold.”—Benjamin M. Friedman, author of The Moral Consequences of Economic Growth