VOLCKER:
The Triumph of Persistence

Over the course of nearly half a century, five American presidents--three Democrats and two Republicans--have relied on the financial acumen, and the integrity, of Paul A. Volcker. During his tenure as chairman of the Federal Reserve Board, when he battled the Great Inflation of the 1970s, Volcker did nothing less than restore the reputation of an American financial system on the verge of collapse. After the 2008 financial meltdown, the nation turned again to Volcker to restore trust in a shaky financial system: President Obama would name his centerpiece Wall Street regulation the Volcker Rule. 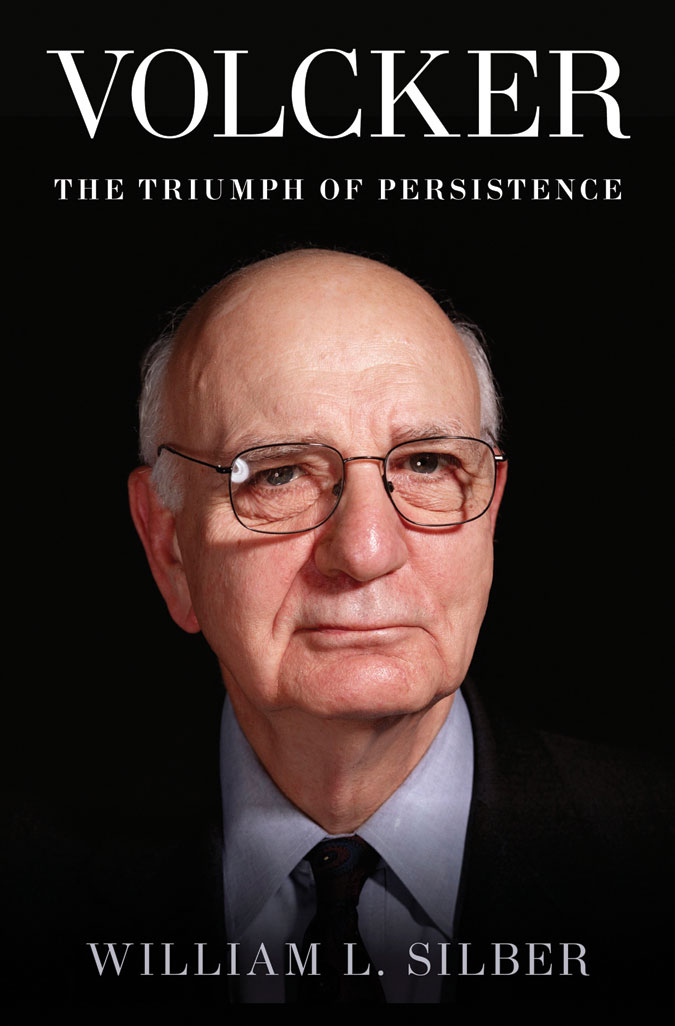 This biography, based on one hundred hours of personal interviews with Paul Volcker, as well as on complete access to his personal papers, shows that a determined central banker can prevail over economic turmoil--so long as he can resist relentless political pressure. Volcker's resolve and independent thinking--sorely tested by Richard Nixon, Jimmy Carter, and Ronald Reagan--vanquished an escalating inflation that Carter said promoted a "crisis of confidence in America." The narrative shows that it was only Volcker's toughness on monetary policy that "forced Reagan to be Reagan," which ultimately led Congress to rein in America's runaway deficit of the 1980s. Both monetary restraint and fiscal rectitude laid the foundation for a generation of economic stability--a lesson worth remembering in the second decade of the twenty-first century.

Named "One of 2012's Great Leadership Books" by The Washington Post

"Comes at the perfect time. Mr. Silber offers fascinating subplots and revelations along the way--not to mention a portrait of a tough and colorful man--but his main storyline concerns two of the most dramatic policy changes in economic history, one international, the other domestic. Mr. Volcker played a key role in both." --John B. Taylor, Wall Street Journal

"William L. Silber has written a rich and detailed new biography of a man who has left as deep an imprint on the world economy as anyone of his generation."-- Neil Irwin, Washington Post

"Mr. Volcker barely made it though his eight years at the Fed. He nearly failed to be reappointed in 1983 and almost resigned in 1986, when defeated on a key vote. It was only in retrospect that his reputation grew; Mr. Silber's well-written book should help cement it."--The Economist

"William Silber, a financial historian and professor at the Stern School of Business at New York University, has the challenge of fitting this lopsided story--his subject, who turned 85 last month, enjoyed his most fruitful years before age 60--into a coherent narrative. He succeeds admirably in Volcker: The Triumph of Persistence. Silber, who had Volcker's cooperation, emphasizes the former Fed chief's independence and willingness to take unpopular stances, a trait as laudable in public life as it is uncommon."--Roger Lowenstein, Bloomberg Businessweek

"Paul Volcker was chairman of the Fed from 1979 to 1987. His foe was inflation--the opposite of the high unemployment fought by Ben Bernanke today. But the pressures on the two men from purist academics and interfering politicians are eerily similar. That makes this fine new biography especially timely." --Robin Harding, Financial Times

"I have just finished reading the book, "Volcker: The Triumph of Persistence," by William L. Silber. It is an excellent book, well written, and a book that I could not put down."-- John Mason, Seeking Alpha

"William Silber weaves a subtle link between the three crises that tested Paul Volcker: gold in 1971, inflation in 1979, and sub-prime mortgages in 2007. He tells the story of Volcker's success in a lively and authoritative style, but unless America heeds the lessons for fiscal responsibility that Silber draws from Volcker's record, the crisis that lies ahead could make those past upheavals seem tame by comparison. Every member of Congress and concerned citizen should read this book."--Nouriel Roubini, Chairman, Roubini Global Economics and author of Crisis Economics: A Crash Course in the Future of Finance

"By observing the life of Paul Volcker, an extraordinary public servant, William Silber has created an absorbing story about how theories and personalities affect public policies and economic outcomes. This book presents a novel explanation for how Volcker defeated inflation, and at the same time, delivers an important message for the complex economic problems we face today."--Thomas Sargent, 2011 Nobel Laureate in Economics

"This book shows how much the character and purpose of a single man can play a fundamental role in economic history. The end of the gold-dollar standard in 1971 and the end of out-of-control inflation after 1979 are the dominant economic events of the last half century. But standard economic models do not tell us why these things happened. William Silber shows strikingly how much the leadership of Paul Volcker lay behind these events."--Robert J. Shiller, Yale University, author of Irrational Exuberance

"Paul Volcker's contributions to the health of our economy and society are truly legendary, so all of us can learn from this careful account of his thinking and his courageous actions."--George P. Shultz, former Secretary of Labor, Secretary of the Treasury, and Secretary of State

"Paul Volcker championed mystique as the essence of central banking--but always resting on the twin foundations of principle and analysis. Using previously unpublished papers and private conversations, William Silber delves behind the mystique to reveal the principles and analysis that guided this towering figure of international finance over the past 40 years."--Mervyn King, Governor of the Bank of England

"Volcker: The Triumph of Persistence gives an insightful account of the true depth and breadth of America's financial crisis and its heavy political pressures as the country faced potential economic collapse. Volcker is one of the wise men of this period."--Henry A. Kissinger

"What makes this book great and not just good is the confidence and authority with which Silber presents his case. Volcker has found his muse. The sheer courage it took Volcker to battle inflation gives today's central bankers something to live up to."--Amity Shlaes, author of The Forgotten Man

"This is a well-written and comprehensive book that reveals the many attributes of Paul Volcker. Silber shows that Volcker did not become an instant folk hero. Rather he fought valiantly and successfully to overcome opposition from powerful politicians and institutions while breaking the back of inflation. After reading this book people will understand how Volcker balanced public and private responsibilities while becoming an American financial icon."--Henry Kaufman

"Silber provides an overview of American economic history as well as insights into surviving financial crises and the complexities of economic decision making. Its in-depth treatment of its subject and the primary documents and notes it includes would be challenging to find by other means. Recommended"--Library Journal

"From a fellow economist, an admiring biography of Paul A. Volcker, blessedly free of jargon."--Kirkus Reviews