WHEN WASHINGTON SHUT DOWN WALL STREET:
The Great Financial Crisis of 1914 and the Origins of America's Monetary Supremacy

When Washington Shut Down Wall Street unfolds like a mystery story. It traces Treasury Secretary William Gibbs McAdoo's triumph over a monetary crisis at the outbreak of World War I that threatened the United States with financial disaster. The biggest gold outflow in a generation imperiled America's ability to repay its debts abroad. Fear that the United States would abandon the gold standard sent the dollar plummeting on world markets. Without a central bank in the summer of 1914, the United States resembled a headless financial giant. 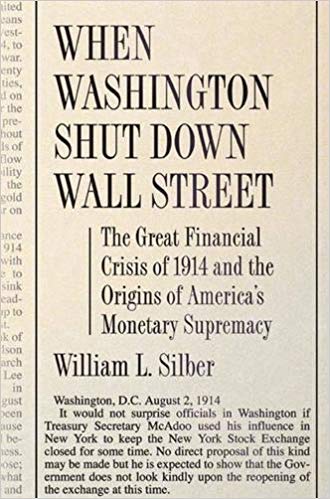 William McAdoo stepped in with courageous action, we read in Silber's gripping account. He shut the New York Stock Exchange for more than four months to prevent Europeans from selling their American securities and demanding gold in return. He smothered the country with emergency currency to prevent a replay of the bank runs that swept America in 1907. And he launched the United States as a world monetary power by honoring America's commitment to the gold standard. His actions provide a blueprint for crisis control that merits attention today. McAdoo's recipe emphasizes an exit strategy that allows policymakers to throttle a crisis while minimizing collateral damage.

"An insightful new book by William L. Silber . . . argues that the closing of the New York Stock Exchange at the outbreak of World War I played a critical role. . . . The conventional view was that the exchange was closed to keep share prices from plunging. But the book, When Washington Shut Down Wall Street, asserts that the historians--and contemporary observers--had it wrong. . . . By delaying the reopening of Wall Street and making sure that American grain was ready to be exported to Europe to bring in gold, the United States was able to stay on the gold standard and become an alternative to London as a financial capital."---Floyd Norris, New York Times

"In his fascinating work of financial history, When Washington Shut Down Wall Street, William L. Silber recounts the heroics of Treasury Secretary William McAdoo, who closed the New York Stock Exchange for more than four months--four months!--in 1914 to avert a larger economic crisis. . . . It was, as Silber explains, a brilliant exercise of arbitrary power that helped propel the United States toward global financial supremacy."---Carlos Lozada, Washington Post

"It is an engaging story; part economic history, part how-to manual on dealing with financial crises. . . . William Silber's main contention . . . is well taken. It takes a lot to uproot an incumbent world financial leader. Potential rivals need to be smart enough to take advantage if and when a moment of opportunity arises--a moment that almost by definition will be one of global financial crisis."---Krishna Guha, Financial Times

"[This] lively new book by New York University economist William Silber, When Washington Shut Down Wall Street, makes a convincing plea for the inclusion of William McAdoo in the Dollar Pantheon."---Daniel Gross, Slate.com

"Reading Silber's tale of unintended consequences is as close as one gets to a historical 'thriller.' At the same time, one can't help but reflect on the challenges ahead. A 'rebalancing' of the world economy in today's environment will be much more complex than was the case in 1914. As then, the outcomes are unlikely to follow popular predictions. In this respect, as well as in providing a fascinating historical account of a major financial and political drama, Silber does any reader great service."---Edward Waitzer, Financial Regulator

"More than just a ripping yarn--and it is that--[When Washington Shut Down Wall Street] is a cautionary tale of how humankind can get suckered into so believing economic myths that they take on a dangerous reality."---James Srodes, The Washington Times

"When I first picked up this book, I wondered whether it described events so long ago that they were irrelevant today and whether it would be written in such an academic fashion as to be turgid and unreadable for the ordinary mortal interested in business and a good read. Well, I was wrong on both counts."---Richard Keatinge, Irish Times

"This short volume tells the intriguing tale of how the financial crisis wrought by Europe's plunge into World War I opened the door to America's emergence as the world's dominant financial and economic power. Few writers have paid much attention to the closing of the Exchange, except as a curiosity exemplifying the shock experienced by Americans when the war came. Silber has done historians a favor by placing that event in a context that reveals its broader significance."---Maury Klein, Business History Review

"When Washington Shut Down Wall Street is a thrilling yet compact financial history of events surrounding the crisis at the outbreak of the first world war. . . . Overall, it's well-written and articulate, and one of the historical financial reads of the year that also offers a blueprint for the future, outlining Silber's words the legacy of 1913 and what that year can teach us about crisis management, even in today's gloomy economic outlook."---Paul O'Doherty, The Investor

"Economist William L. Silber has written a fascinating account . . . that may appeal to students of banking and finance interested in leadership and crisis control."---Alfred E. Eckes, International History Review

This book addresses an important issue that deserves wide readership. It is lucid and clear and deals with some very important episodes in American history."--Milton Friedman, Nobel Prize-winning economist

"William Silber has performed two sterling services with this fascinating and original book. He has illuminated the hitherto neglected financial crisis of 1914, an event that deserves to be mentioned in the same breath as the Crash of 1929 in the history of Wall Street. But he has also come up with some bold and compelling answers to two burning questions that are of more than purely historical interest: How should monetary policymakers cope with a really big and unexpected political shock? And how does one international reserve currency come to be overtaken by another? I cannot praise this book too highly. It is rare that one author so skillfully unites the disciplines of finance and history."--Niall Ferguson, Harvard University, author of Colossus

"A fascinating story that mixes first-rate economic theory with telling observations about U.S. financial and monetary policy decisions taken in the midst of an international finance crisis that were permanently to reshape the international financial landscape. The book is full of insights about the ideas and the personalities of the founders of the Federal Reserve System and other anchors of our financial system today."--Thomas Sargent, Hoover Institution, coauthor of The Big Problem of Small Change

"Silber tells a compelling tale proving the power of the law of unintended consequences. The financial crisis of 1914 was a major turning point in American economic history, an outcome nobody could have predicted as massive amounts of gold sailed to Europe, banks shook at their foundations, and the nascent Federal Reserve System was only just going into operation. What a story!"--Peter L. Bernstein, author of The Power of Gold

"Silber's book weaves a fascinating historical story about the shaping of U.S. financial policy during the chaotic years surrounding World War I. The story centers on William McAdoo, who as Senator, Treasury Secretary, and first Chairman of the Federal Reserve System, displayed courage and principles which paved the way for the success of financial institutions that we take for granted today. The story of McAdoo's role in securing the dominance of the U.S. in the world's financial markets will inform a new generation of students of financial markets."--Robert Shiller, Yale University, author of Irrational Exuberance

"When Washington Shut Down Wall Street iis political and financial history at its best. William Silber reminds us that the U.S., and indeed the world, might easily have suffered a financial meltdown when World War I began. Instead, largely because of U.S. Treasury Secretary William McAdoo's leadership skills in staring down incipient financial crisis, the summer of 1914 became the panic that didn't happen. By year end, the dollar had become the world's strongest currency, paving the way for U.S. international leadership from then to now. Anyone interested in what leadership is, and how it is gained and retained, will want to read Silber's fascinating account of 1914."--Richard Sylla, New York University, President of the Business History Conference

“One of the great strengths of the book is that while it never loses sight of the major issues—the rise of New York as the world’s leading financial centre, crisis management, and so on—it also explains the workings of the financial sector in convincing detail. Every postgraduate student of economics and finance, and many of their academics, would benefit from reading these sections and seeing how the financial series to which we apply our econometric skills actually arise from the actions of real people coping on a daily basis with problems that appear to them to be unprecedented." Hugh Rockoff, Rutgers University